20 Years of Marriage Passed By In a Flash! 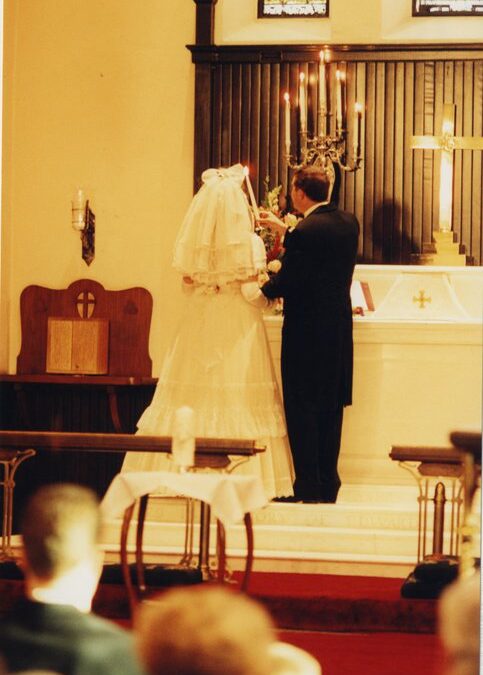 It’s hard to believe that 20 years ago my husband, Travis, and I were married in Manitou Springs, Colorado. 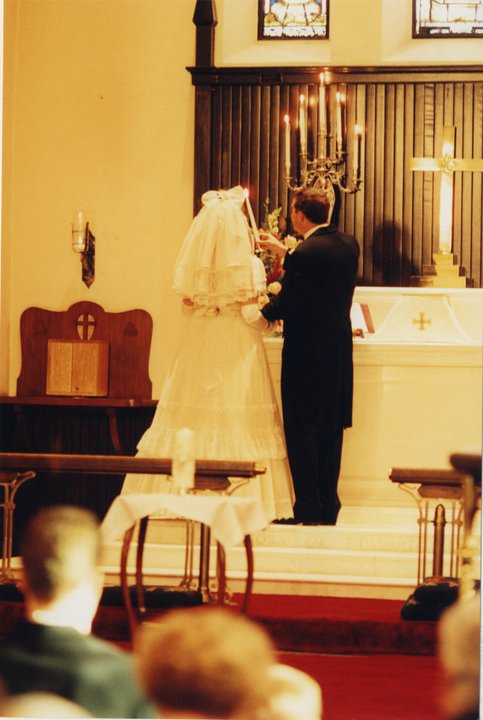 As usual, I had to do everything from scratch and I chose a Victorian theme.

My mother made a beautiful flower arrangement and then painted it. And I turned the art into invitations, a program, and stationery. Years later I would turn the artwork into cards. 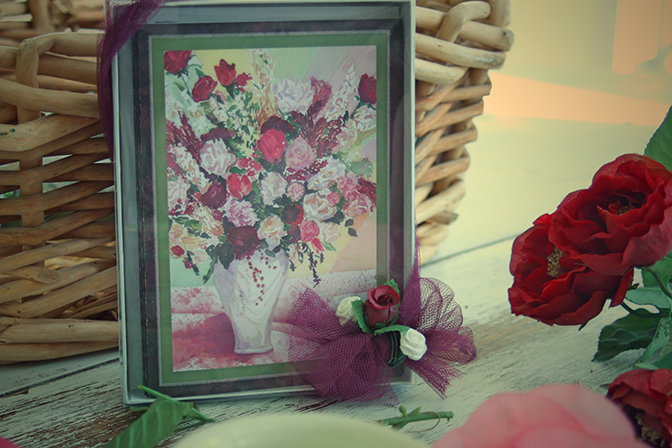 Our wedding was a beautiful day, and it went so quickly! After the honeymoon and I moved into Travis’ apartment in Texas, I had a dream that we did something wrong and we had everything all over again. What a nightmare that was! 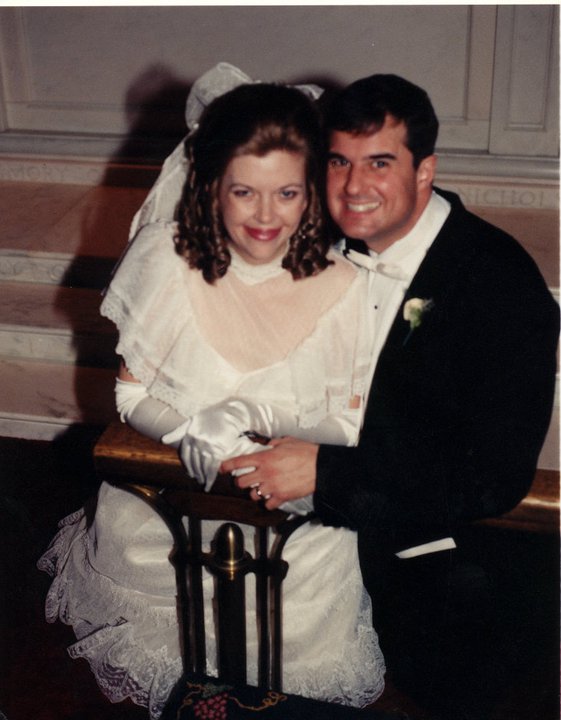 We met three years prior, December 2, 1995, on a blind date at the Madrigal Dinner that Glen Eyrie Conference Center puts on every year. We’re going to celebrate their this Friday night and we’re bringing my parents. That’s because the night before our wedding we took our parents to the Madrigal Dinner. Then suddenly at 9 pm my mom and I looked at each other and we knew we had to go home! Sure enough, we caught a nasty stomach virus that was making the rounds and I spent most of the night throwing up. My friend that I was staying with said I should postpone the wedding and I said “No way!” I took some alka seltzer and went on my way. I was extremely nervous because I had done ALL the coordination of the ceremony. But all my jitters went away when I turned the corner when walking down the aisle with my Dad and saw my husband-to-be’s smiling face. He was beaming!

When I met Travis that day in 1995, I didn’t know what he looked like and he didn’t know what I looked like. This was, after all, before Facebook! I saw a man in a tux with dark hair walk down the stairs. I thought to myself, “My, he’s good looking. Why can’t I meet a man like THAT?” A few seconds later he looks at me and says, “Dana?” 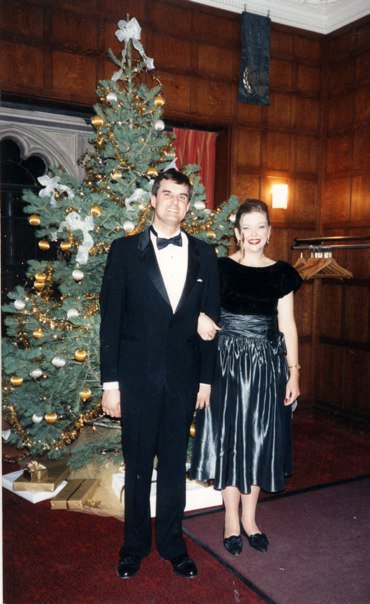 So three years later I became his bride! 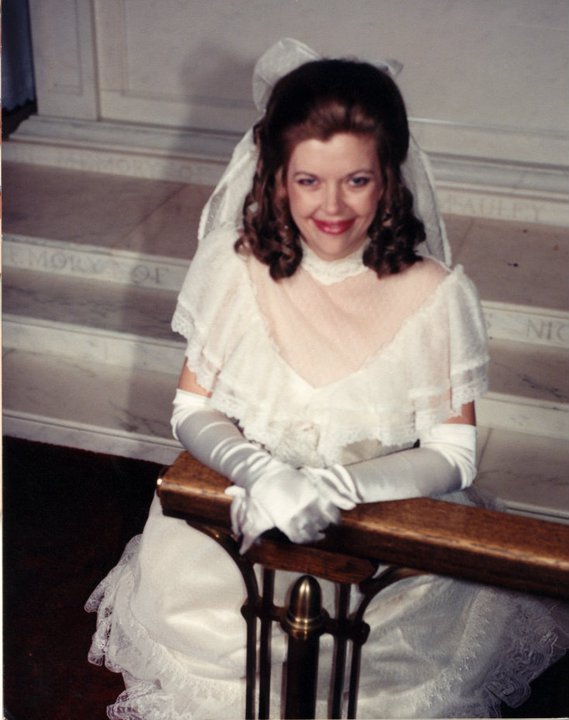 My favorite part was riding in a horse-drawn carriage. Travis looks so classy! 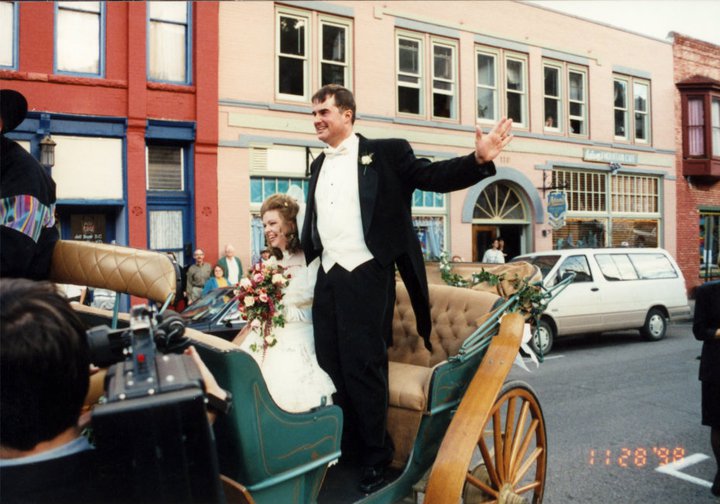 It was fun having rose petals thrown at us as we left the church. 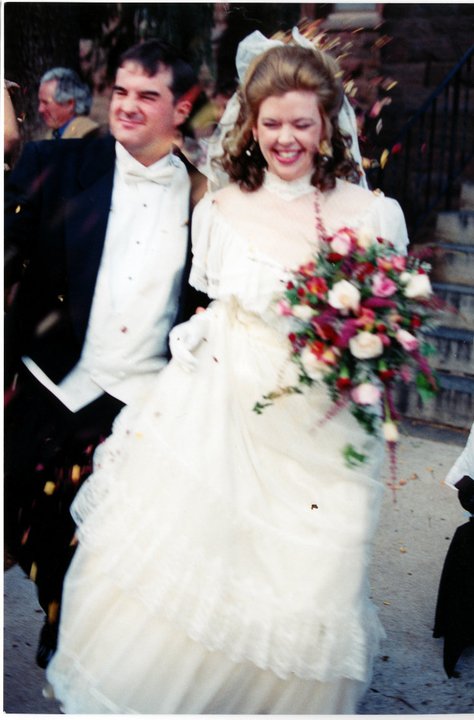 That first night we met, Travis said he wanted to remodel old houses and I said I wanted to decorate them. Well, that dream came true that it cost us dearly. But through all the adversity we became even closer to one another and definitely became closer to God. 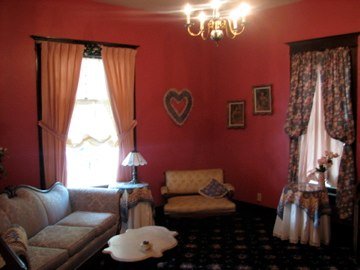 20 years later we still have fun together and we love getting dressed up! We especially love theme parties. 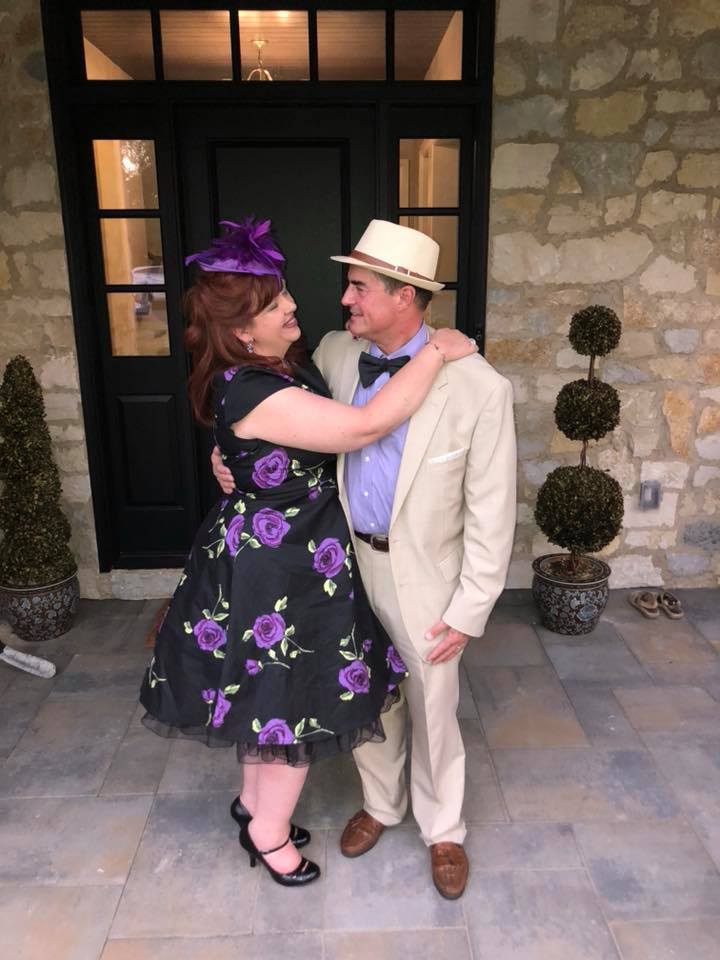 Last year for my birthday we were King Aragorn and Queen Arwen. 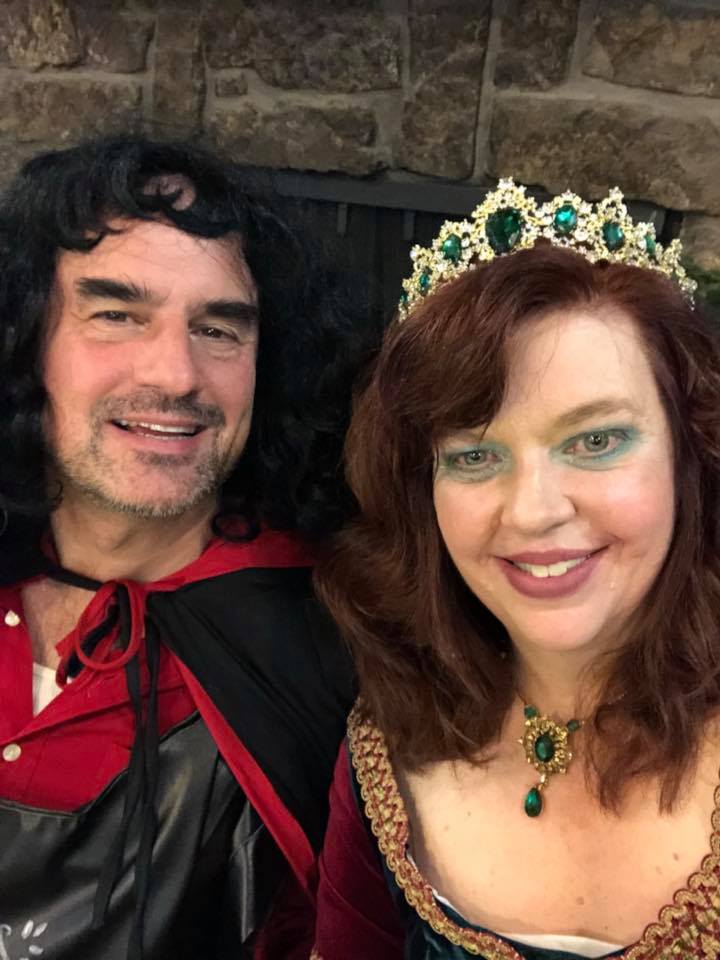 We had a wonderful honeymoon in San Diego, California. We especially had a blast on a dinner cruise ship where we danced the swing. We were the only ones on the boat who knew how to do it. We had a crowd cheering us on! 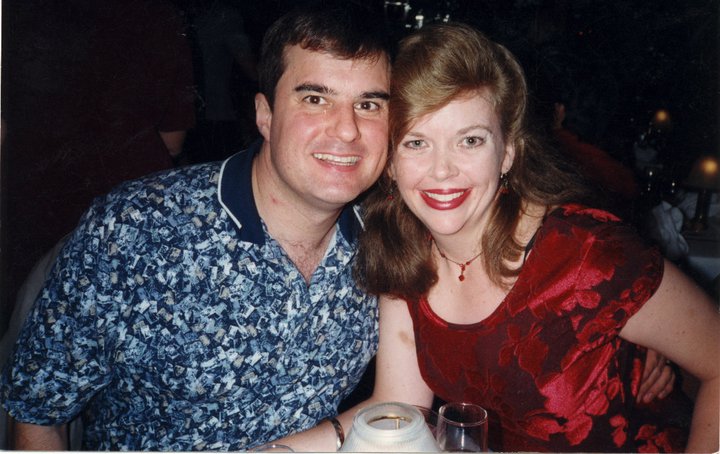 It’s hard to believe 20 years have gone by! Life is challenging but we keep climbing! Our son Sam will be 18 in January and that is REALLY hard to believe. Our family has expanded with my nephew and his wife moving up to Colorado Springs to help me with AngelArts. 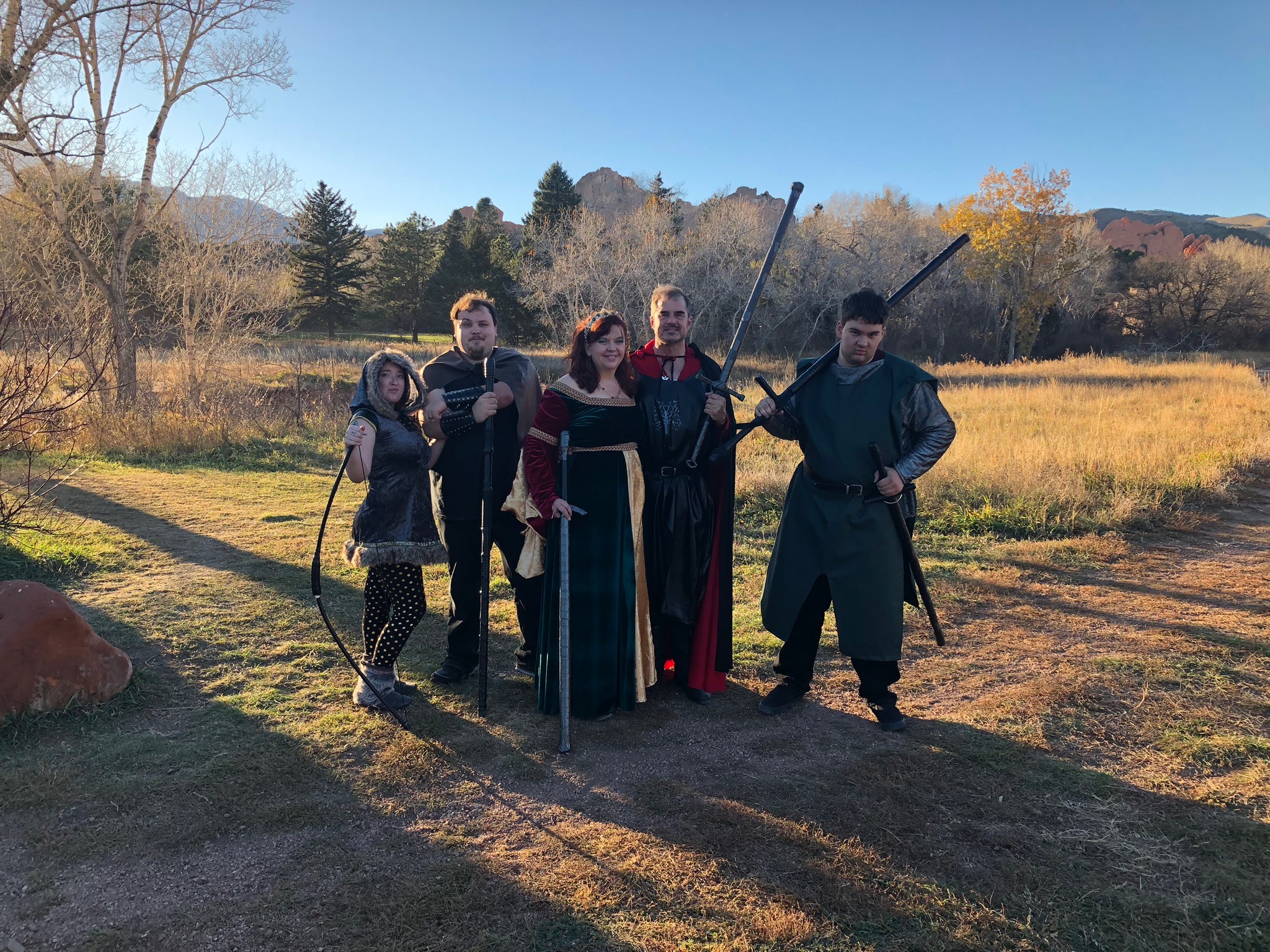 Ready for a Fresh Start?

2020 has been a disaster. Now more than ever you need revival in your business and beyond. Here's a 5-day free challenge that will help you do just that!